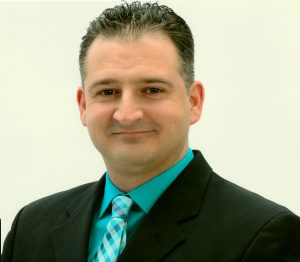 Daniel Fazzina is a child of God, a husband, a father, an author, an entrepreneur, a publicist and media professional.  His experience includes producing and hosting radio shows, doing voice over work for commercials, videos and audio books, editing music videos, directing a short film and award-winning commercials.  He also specializes in booking publicity clients, such as authors, speakers, ministers, musicians and filmmakers, on radio and television talk shows in order to get their messages out.  He served as a board member of St. John’s University’s chapter of InterVarsity Christian Fellowship, where he earned his B.S. in Communication Arts in 1998.  After studying in Spain, Italy, and France, and doing missionary work in the Dominican Republic, he has gained a broadened appreciation for different peoples, languages, and cultures.  His talk show, Divine Intervention Radio can be heard on radio stations across America, and on the Internet at www.divineinterventionradio.com.  Daniel’s own personal testimony of miraculous healings – one from a painful chronic back condition in 2001, and one from a massive, cancerous tumor in 2002, led him to start the Divine Intervention Radio show and book series in 2007, in which he interviews intriguing people who have experienced the hand of God in amazing ways.  He also hosts Success Profiles, a radio show he started in 2016, on which he interviews millionaires, entrepreneurs, thought leaders and high achievers about the keys to successful living.  Mr. Fazzina’s additional interests include biblical apologetics, alternative fuel technologies, entrepreneurship, science fiction/fantasy, networking, reading, personal development, writing, economics, cryptozoology, and creation science.  A native New Yorker, he resides in Virginia with his amazing bride, Sahani, and their miracle daughter, Evangeline.